It's pretty simple really. Go to the Ring of Kerry in the summer and feel like an ant on an anthill; come to Inishowen and move like a mayfly.

The northernmost part of Ireland is a peninsula in County Donegal with over a hundred miles of coast, long sandy beaches, exceptional hillwalking routes, six golf courses and a myriad of sights and sounds that will captivate. There is no where in Ireland quite like it and if you can appreciate the fact that its remoteness serves as its strength, then you too will be rewarded for travelling the extra road time to get here. Local writer Harry Percival Swan also knew there was something very special about the place:

A land which has behind it a continuity of culture and a depth of history possesses an indefinable fascination, which seems lacking in the new countries like America. Such a land is Inishowen-once an island as its name implies. One comes away from Tara disappointed, and thinking heretically that more impressive remains of early times are to be found elsewhere. such an early memorial is the Grianan of Aileach, the stonehouse of the sun, in Inishowen. Here a palace stood, possibly that referred to by Ptolemy from which eighteen high kings ruled over Ireland. This was after Saint Patrick "had blessed Aileach of the kings and left his flagstone there".

Aileach's time as the political hub of Ireland may have diminished, but the panorama from there is still breathtaking, an early indicator at the southern tip of Inishowen that something special awaits. Move at your leisure, meet friendly folk, breath in that sea air and enjoy an altogether different pace of life. You are in God's own country, Ireland's best kept secret, the isle of Eoghain, Inishowen. 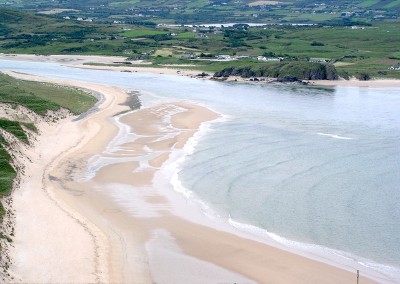